Tomorrow Laf and I will fly back to Whitehorse, marking the end of the North American chapter of the CAT project. Exactly 6 months after Steve dropped me off in Deadhorse.

I wish I could elegantly summarize this wonderful adventure, but I can’t: this is exactly why I decided to take a break.  It is impossible to absorb everything that happened over half a year of traveling on a bike without taking a good chunk of time to absorb it all.

Even on my last day of riding, which was pretty easy, I didn’t really have a chance to think much, between having to navigate, trying to catch the ferry to Coronado and having other cyclists riding and chatting with me on the bike paths. And contrary to other places that felt like a milestone (namely the end of the Dalton Hwy, Fairbanks, Whitehorse and San Francisco), completing the ride across North America didn’t feel like a big accomplishment, but rather just another day on the bike. Or the “end of the introduction” to a much bigger adventure.

Well, I felt some sadness at the fact that Mexico is a stone throw away but I will not cross the border for sometime. But that was counterbalanced by the fact that I was going to spent the afternoon with two friends that were likely feeling more or less the same.

I couldn’t have asked for a better way to end the journey: Mark, who had finished his tour 2 days earlier was waiting for me at Imperial Beach, to give me a hug and buy me some ice cream. Sam joined us a couple of hours later.

For the record: I didn’t go all the way to the border with Laf. Mark and I walked on the beach from where we could see Tijuana, less than 4 km away. Good enough.

I was then once again hosted by fantastic people, first in Coronado and then in San Diego. I even had the chance to celebrate American Thanksgiving with Chris’ family. The food was so amazing, that I think I regained the 10 lbs I had lost earlier, all in one night! And talking about great hosts, I added a few pictures to the previous blog, thanks to Ken who sent them to me.

Thanksgiving: what an appropriate time to end this part of the journey! This is all I can say: thank you, to all the people I met, to all the hosts, the supporters, the donators, the ones who smiled, who shared my happiness, sometimes for a moment and sometimes for days, to all the blog followers, to the ones who contributed to this project in one way or another, to the fellow riders. And also thanks to all the ones who bike toured before, and wrote about their stories, which inspired me to embark on this journey.

To answer the question that many asked: I will likely resume the CAT project in the summer or fall of 2020.  Why such a long break? Because if I travel in Mexico in the summer, it will be too hot, and then I would hit the hurricane season in Central America. And as I realized over the last few weeks, I really want to take my time to do this trip, so it will be a multi-year/multi-chapter adventure. But as a friend said, even if I take breaks, it is still the same journey…

And by the way, for those who haven’t already subscribe to the blog, you can do so at https://cathmandu.com/catproject/subscribe/, that way you will be notified when I start posting again. It’s easy to unsubscribe.

To answer another common question: even if it’s hard to choose between all the amazing moments of the trip, the best certainly was riding the Dalton Highway, especially reaching the Dalton Highway sign, at the south end. The low point was without a doubt spending the night on the floor of the campground restroom in Manchester, shivering and vomiting.

Maybe the best thing about doing a trip like this though, is to realize and fully appreciate that the world is a good place, that there are really good people everywhere, and that even if we are all unique, we are also all very human, with similar needs. Paradoxically, we all seem to want to be different, and yet we seek and find comfort in connectedness.

I was wondering what “final words” I would add to this post.  Luck has it that Chris (awesome Warmshowers host where I am staying now) has this perfect sign in his yard: 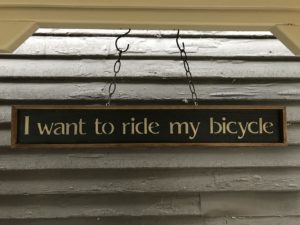 9 thoughts on “Thanksgiving and giving thanks!”