Here I am, sitting in a nice house in San Francisco, one more time thanks to kind Warmshowers hosts. It’s early morning and I can’t sleep any longer, still pondering the pros and cons of taking a break from the road and going home for a while.

I am grateful for all the emails and comments I got from people following the blog. Interestingly, only one person said: “Cat, you are such a wimp, why would you stop now, just keep going. This is what you like, to travel on your bike! Do you really want to go back to working in an office for a few months when you could be riding in Mexico?”

Maybe you guessed who that person is.  Yes, that’s me. Everybody else seems to agree that taking a break is the smartest thing to do. It’s just that sometimes it’s hard to choose the smartest option.

It’s was comforting to hear that even my most hardcore traveler friends truly understand and/or have gone through this before (I have too!).

But it’s a difficult decision to make after you are more rested, your stomach accepts food again, you enjoyed a few fantastic days exploring a new place, and especially after you met (yes, once again!) truly exceptional people that showed tremendous enthusiasm for the CAT project.

Because this is what happened over the last few days in San Francisco.

As I crossed the Golden Gate bridge, dodging numerous tourists (many on rental bikes that likely hadn’t ridden a bike for a long time-if ever), I had this awesome feeling of accomplishment that I felt when I arrived in Whitehorse, and later in Canmore, in Missoula and in Bend. A milestone.

I biked along the water, marvelling at the fact that I could see Alcatraz in the distance, and palm trees. I was in San Francisco!

As I followed one of the numerous bike paths, I chatted with 3 friendly women cyclists who were going the same way. Each red light gave us a chance to chat for a brief moment. They were delightful people and I was happy to realize that contrary to my expectations, it wasn’t hard to connect with people in this big city.

Thanks to my blog, one of these ladies was able to contact me and invite me for coffee. Unfortunately, the timing didn’t work out, but I have no doubt that it would have been a great exchange as Dipti is originally from India and involved in a humanitarian project over there. Her enthusiasm was uplifting.

For a big city, San Francisco is as good as it gets. I spent hours and hours walking, exploring busy commercial streets, alleys displaying stunning murals, admiring the architecture and feeling at times like I was in Mexico already. Of course there is also the darker side, with a shocking number of homeless people. Unfortunately the American dream isn’t for everyone.

I spent a couple of hours with my cyclist friend Mark who was also in the city. We went to Chinatown together and then I continued alone to visit the Beat museum.

Then I enjoyed one of the best meals I’ve had on this trip so far in a delightful French Café. I was kindly invited by Barry, who I had met in Sausalito 2 days before. He was interested in hearing more about my adventure, but after we talked for a brief moment, I realized that he had an extremely interesting life himself, and I could have listened to his stories for hours. Luckily he just wrote a book about some of his experiences, that will be published soon, so we briefly talked about that as well, which encourages me to finish working on my book (one of the benefits of going home…). But it is not what he did in his life that I liked the most about Barry. He is one of those inspiring people that are pure kindness and humbleness. I was very touched by this meeting.

I still have one more day in San Francisco, before I get back on the road to San Diego. It feels strange to think that I may be done riding for a while after that, but I am convinced that I will be even more appreciative. Mexico can wait, even if I feel an almost irresistible pull to continue. Yes, the road will always be there, whether I decide to continue or return later. 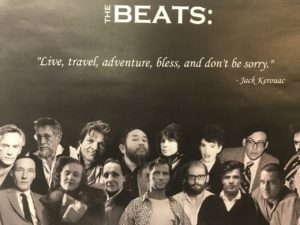 2 thoughts on “Over the Golden Gate”