Here I am in California now, likely my last State before Mexico, unless I detour again…

The first part was pretty amazing.  I had seen the Redwood forest before, but just like the ocean, it is hard to get tired of seeing these massive trees. So from Brookings, I went to Hiouchi to visit the Jedediah Smith Park and then back to the coast where I stayed in yet another church, thanks to a lovely woman named Katie, who has been welcoming cyclists for a long time.

The church also welcomes homeless people once a week, to let them shower and have a meal. That was happening the next day, and I was thinking of staying an extra day to help out, but the nice weather made me feel like riding south, especially after so many days of stormy weather in Oregon.

Most of the next few days were spent in and out of the Redwood forest, and even if I tried to describe the feeling of riding with the giants, it probably wouldn’t come close to what it is.  Especially in the morning, when there is little traffic and the light is just amazing.  Afternoon light is also pretty dramatic. With the fall colours it is like the forest is glowing. Or burning. Which is apparently the case not far from where I am now…

State campgrounds in California are nice, at $5 for hikers and bikers. It is also a good way to meet other cyclists, when we don’t just run (or ride!) into each other on the road.  It’s funny how we hear about this guy or that guy and often we end up meeting a few days later.  Or we bump into people we thought were long gone, but we all take breaks or take detours and somehow meet again.

Arcata was a lovely town with the most amazing food coop.  You can find just about anything in bulk bins there, make your own peanut butter with different types or nuts and flavoured peanuts, etc. They even had maple syrup dispenser.  A cyclist’s dream. I spent a lot of money there, making my food pannier very heavy.

After meeting very friendly people in town, I spent a great evening with my Warmshowers hosts Jay and Ellie. They cooked amazing food and shared some really good info. The next morning I rode through Eureka, and was surprised by the lovely architecture.  I had been told that Eureka wasn’t very nice, but the old part certainly was.

From there, I passed a lot of small towns, some nicer than others. I really liked Ferndale, where I ended up meeting Nick again, who I stayed with in Coos Bay several days ago. He had been taking a few days off since his mother flew to visit him. He introduced me to Marcus, a guy who builds kayaks and travels to the Aleutians to teach the locals. I was tempted to stay in Ferndale for the night, to see more of the town and chat more with Marcus, but finally I kept going to reach the Avenue of the Giants.

What an amazing road, with little traffic, and fabulous trees. I met two more cyclists on the road, including Robert who told me about the incredible flood that happened on the Eel River in 1964. Impressive.

I eventually reached another State Park for the night. This is where I ran into Lina and Lise, two Quebecers that I had met in a gift shop in Florence over a week ago.  They are travelling in a Road Trek van, and as soon as I said hi, they invited me to join them for supper.  We spent the evening talking “Quebecois” by a lovely campfire. It was a really enjoyable night.

At the next State Park, I met Wil, a 64 year old cyclist from New Orleans.  We had a long chat and I was amazed by how he could express so nicely what it is to be a tour cyclist.  I loved the expression “enjoyment effervescence” that he used to describe both how we feel about bike touring and how non-cyclists we meet feel about our journeys. He also mentioned how difficult it is to remember everything, and the need to stop once in a while to process it.  I feel exactly that way, like my memory is getting overloaded. Often I can’t remember where I rode the day before, how the hills were, what I saw, who I met…

However, I do remember that last night I fell asleep in my hammock, watching the stars I could see between the trees, listening to music. A blissful moment, except that my stomach was so full from overeating again that I could not stay in “hammock position” and eventually had to retreat to my tent. It’s crazy how much I eat, but my stomach just can’t process all the food I need to eat, so I often feel nauseated at night. And somehow I wake up hungry again in the morning!

Now I am staying with another cyclist in a Warmshowers house. I won’t overeat tonight, Michael’s dog ate most of the food I had left…  Oh well, I should have known that a dog on a bike trip would not resist digging into my panniers.

The last 3 days were really big days. California is beautiful but it comes at a price! Sometimes I feel strong, other times I even wonder if I have a flat tire because I don’t seem to move. My knees were doing surprisingly good, but at the end of the day today, they let me know that it’s time for an easier day! Well, the forest fire situation in California might also dictate a few days off.

And the final words… 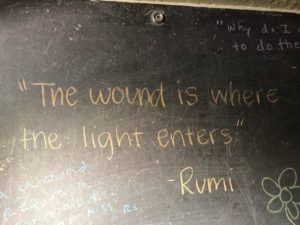 5 thoughts on “Riding with the Giants”