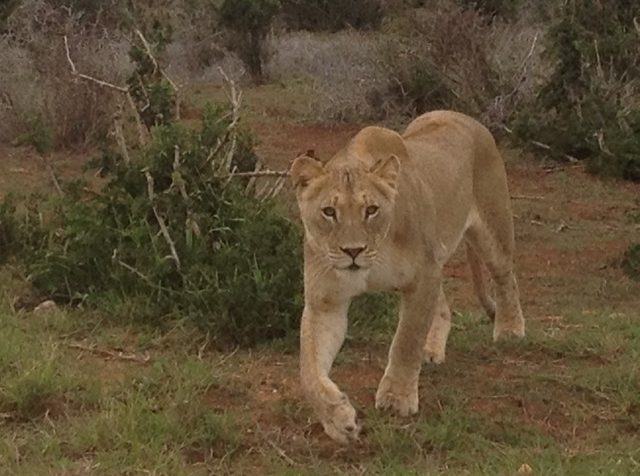 Sometimes not having set plans is the best plan. Meeting the Swiss cyclists on day 2 of my bike trip was pure luck, but led to some of the best times I had on this trip. I had intended to ride to Knysna and then back to Cape Town, but Arnaud and Anouk were going to Addo National Park to see some wildlife and we decided to go together. That meant riding to Jeffrey’s Bay, renting a vehicle, driving to Addo together and then I would drive the car back to Jeffrey’s Bay and they would continue their trip to Tanzania while I would ride back to Cape Town.

Good plan, but with some challenges: first we had to ride to Jeffrey’s Bay in one day, which was our longest ride so far, but luckily not too hilly and the wind was mostly favorable. It was a great day, with lots of people cheering for us, and another guardian angel who stopped to refuel our water bottles just as we were running out. We arrived in Jeffrey’s Bay pretty tired but quite happy to be there. We got there just on time to rent a car for the next 2 days. To save money, we rented a small car, a VW Polo, hatchback. It is sad that I don’t have a picture of the fully loaded car, but we called it the “Polo Challenge”, sort of a massive Tetris game: trying to fit 3 cyclists, 2 bikes, 12 panniers, 2 drybags and all the little extras (water bottles, helmets, etc.) in the vehicle. I couldn’t believe it, but it worked! I was the lucky one since I was driving: I was far more comfortable than Anouk who had to hold a pretzel position for 2 hours. Good thing she likes yoga.

The final challenge was for me to drive on the left side. Well, actually, the challenge started before that, when I tried to unlock the car and it wasn’t working. I then realized (embarrassingly with the help of the lady from the car rental place…) that I unlocked the driver’s door, but was standing on the wrong side of the car… Hum… Bad start. But then I managed, only once did Arnaud have to tell me that I was on the wrong side… Oopsy!
But it was all worth it. I think this time the pictures will speak for themselves. We saw elephants, zebras, buffalos, hartebeest, bushbuck, eland, kudu, warthogs, jackals, monkeys, dung beetles, several beautiful birds and lions!!!!! We thought we were lucky to see lions the first day, but today, one came so close to us, she actually looked at us straight in the eyes and we all thought she was going to jump in or on the car. And same with the elephants, they came so close to us, we almost could have touched them. Waw. What a treat!

After our drive in the park, we said good bye, wished each other safe travels and I drove back to Jeffrey’s Bay, happy to be in a vehicle and not riding since the weather was really bad. Much needed rain though…

I am now camped at another Backpackers’ and hope to get some rest tonight. Might be difficult as J Bay is a surfer’s haven, a party place. A bit of a contrast after a couple of days in a park… Tomorrow I will have a challenging day as I start my journey back to Cape Town on Route 62. I look forward to it.